My name is Ray Camello, I’m a photographer.

The world without photography will be meaningless to us if there is no light and color, which opens up our minds and expresses passion.

If Walt Disney looked out the gates from the entryway to Disneyland, what would or wouldn’t he see?   He wouldn’t see the parking lot, but would now see Disney California Adventure across the way.   He would see his cast members scanning, instead of collecting Disney passes into the park.  He would still see families walking through the gates, but would no longer see children in their Sunday best, men dressed up in suits, and women in fancy dresses and  heels. Behind him, he wouldn’t see a roped in line where guest would wait their turn to take a picture in front of the Main Street train station.   He wouldn’t see the Lilly Belle Passenger cars in original gold with blue trim.  Instead, he would see a glimpse of the Lilly Belle Coach car in Red.   He would still see the Mickey floral design down below the train station but would no longer view posters mounted on the steel bar fence.

A lot has changed since Walt Disney walked through the front gates of Disneyland.  It makes me wonder what he would think of Disneyland today.  Would he like the direction Disneyland has evolved to?  Is the Disneyland of today a place he would still take his young daughters to?  I enjoyed Disneyland when I was a 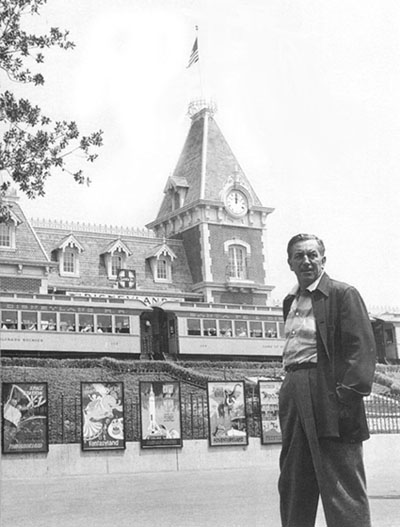 kid, so I want my kids to enjoy it also…but Disneyland is a lot different today.

While standing in long lines at the park, I was surfing the net on my phone and stumbled on an old black and white picture of Walt Disney in the front entrance. (Source: https://www.justdisney.com/)

Looking at the picture, the entryway didn’t change that much.   The train cars are not fully enclosed anymore and the Santa Fe sign is different.  Posters are not mounted to the fence and there wasn’t a brick wall.  I walked to

the front gate and tried to take a picture in the same angle… imagining the original photographer was probably crouched like me and Walt Disney was standing right in front of me.  People around me were looking strangely at me while taking the picture, but all I could see is Walt was standing not too far from where I was close to 70 years ago .There is no way to take this picture today without someone standing by brick wall in front of the train station.

What I learned and what I would do differently?

I wouldn’t change anything.  Without being able to see the original image in my view finder, I did the best I could do in capturing the angle.  The fun part was playing in Photoshop.  I researched the original color of the Lilly Belle train cars, found all the original posters through google… and added shadows to reflect the time of day.  The only thing I had to guess on was Walt Disney’s clothes.  Looking at colored pictures of Walt Disney, I noticed he tended to wear a lot of dark blues and grey.   So I went with that when I colorized his clothing.  I had a lot fun on the project.   Here is another picture of how the Disneyland Train Cars look today.

If you would like to see more Photoshop projects where I add old captured images to new… please leave a comment.   If you have any cool ideas, please let me know.